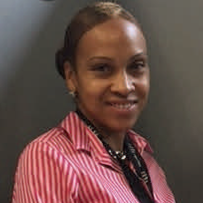 Ms. Walker began her career at SCLARC in 2015 as a Service Coordinator and was promoted to Fair Hearings and Complaints Manager in 2017.  She was promoted again in 2020 to Human Resources Director.  For the past 15 years, she has worked to develop her skills in the social services arena.  Most recently, prior to becoming employed with SCLARC she worked as a Probate Court Investigator for the Superior Court of Orange County where she investigated the Conservatorships of individuals lacking capacity to care for themselves.  Many of those individuals had developmental disabilities and were served by Regional Centers. During her time as a Service Coordinator with SCLARC, she gained personal first-hand experience linking those served by SCLARC with the supports necessary to lead an independent life as possible.

In the role of SCLARC’s Fair Hearings Manager, Karmell worked to resolve the appeals presented to the agency when an individual served received a denial for services or eligibility.  Currently, as the Human Resources Director, she is responsible for leading and directing the  functions of the Human Resources (HR) department including hiring and interviewing staff, administering pay, benefits, leaves of absences, and enforcing company policies and practices.

Ms. Walker received her Juris Doctorate, Law Degree from William Howard Taft Law School, her Masters in Human Behavior from National University and her Bachelors of Arts degree in Sociology from California State University, Northridge. She completed a Paralegal certificate from Cerritos College and also holds a certificate in Human Resources Management from GoldenWest College.