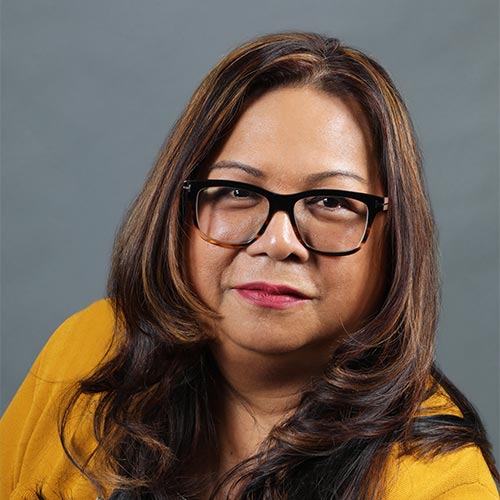 Maricel Cruzat is Director of Clinical Services at South Central Los Angeles Regional Center where she is responsible for providing leadership and guidance to the Clinical Team which is comprised of the Intake Units (Early Start and Lanterman), Early Start Program, and various other Clinical staff and Consultants.

For the past 28 years, Ms. Cruzat has provided support and advocacy for individuals with developmental disabilities.  She has a deep passion for her work and believes that all individuals, regardless of their level of ability, play a valued role in the community and have a right to reach their full potential.  She is dedicated to this work and the well-being of individuals served by SCLARC is her highest priority.

With extensive experience working in various service milieus supporting individuals with developmental disabilities, Ms. Cruzat started her career as a Direct Care Provider in a behavioral day program. She also served as a Program Manager for Level 4 G and Level 4 I residential care facilities, serving individuals who transitioned out of the Sonoma Developmental Center. She then accepted a position as a Program Coordinator for a Supported Living Agency in Northern California.  After relocating to Southern California, Ms. Cruzat worked as a Service Coordinator at North Los Angeles Regional Center for three years. There she was then promoted to Consumer Services Supervisor for the School Age Unit and then became the Federal Revenue Supervisor overseeing the Medicaid waiver program.

In 2007, Ms.  Cruzat moved to South Central Los Angeles Regional Center where she accepted the position of Federal Revenue Coordinator. Ms. Cruzat’s career flourished at SCLARC and she was promoted to Quality Manager in 2010. In 2016 she was, again, promoted to Chief of Federal Programs. Finally, in February 2017, she was promoted to the Director of Clinical Services where she currently serves.